Wedding songs are the core of weddings because they blend with every stage of a wedding. This is why when planning a wedding, couples make up a wedding songs list for the day, and for those who are not so hands-on, pay tons of cash to a great DJ.

Some songs are so popular and are the most fun wedding songs. They have the magic that makes the crowd go wild, but unfortunately, they may not be appealing to the ears or fit for wedding receptions. In July 2017, five forty-eight rounded up a list of 48 most banned wedding songs after interviewing DJs; we seem to agree with them. Please tell, who still does line dances which date back to the 1950s in 2018? 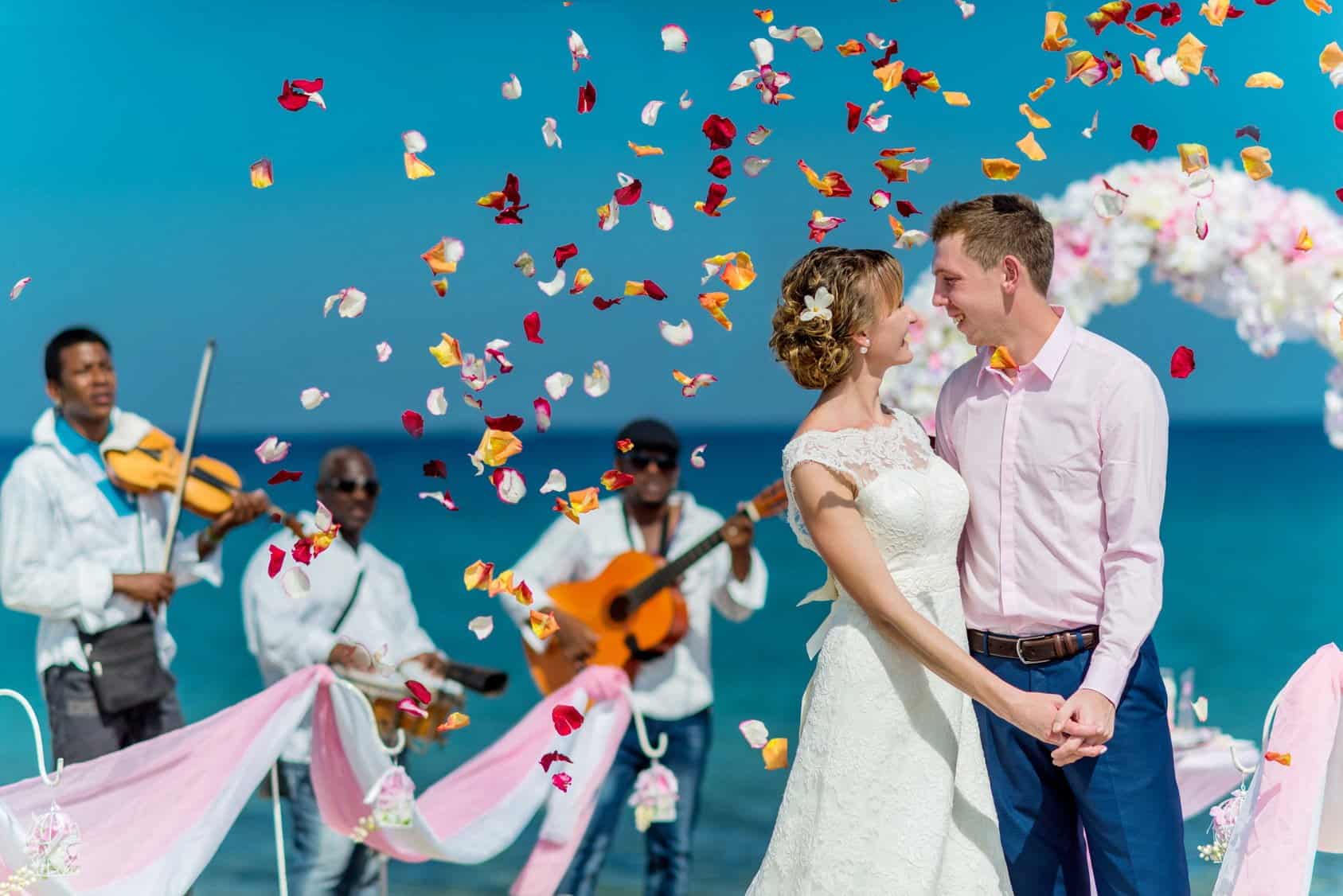 The top 10 banned songs are weird wedding songs that will leave you and your guests disgusted and uncomfortable. This is why most couples give DJs a must playlist and do not playlist wedding songs. These banned songs can leave your guests mortified and always remember your day with a sour look on their faces. But we have a little issue. What is wrong with “happy” and even “Cupid”? They should not be on this list. We also love the techno wedding songs list, especially “thinking about you” by Calvin Harris. Ayah Marar. But you should see them for yourself.

Suppose you have hit a dead end because your best songs made a list, worry not. There are 100 new wedding songs for 2018 to play at your reception! Going by the most banned songs, we’ve compiled the top 10 most-banned songs for you to do without in 2018. 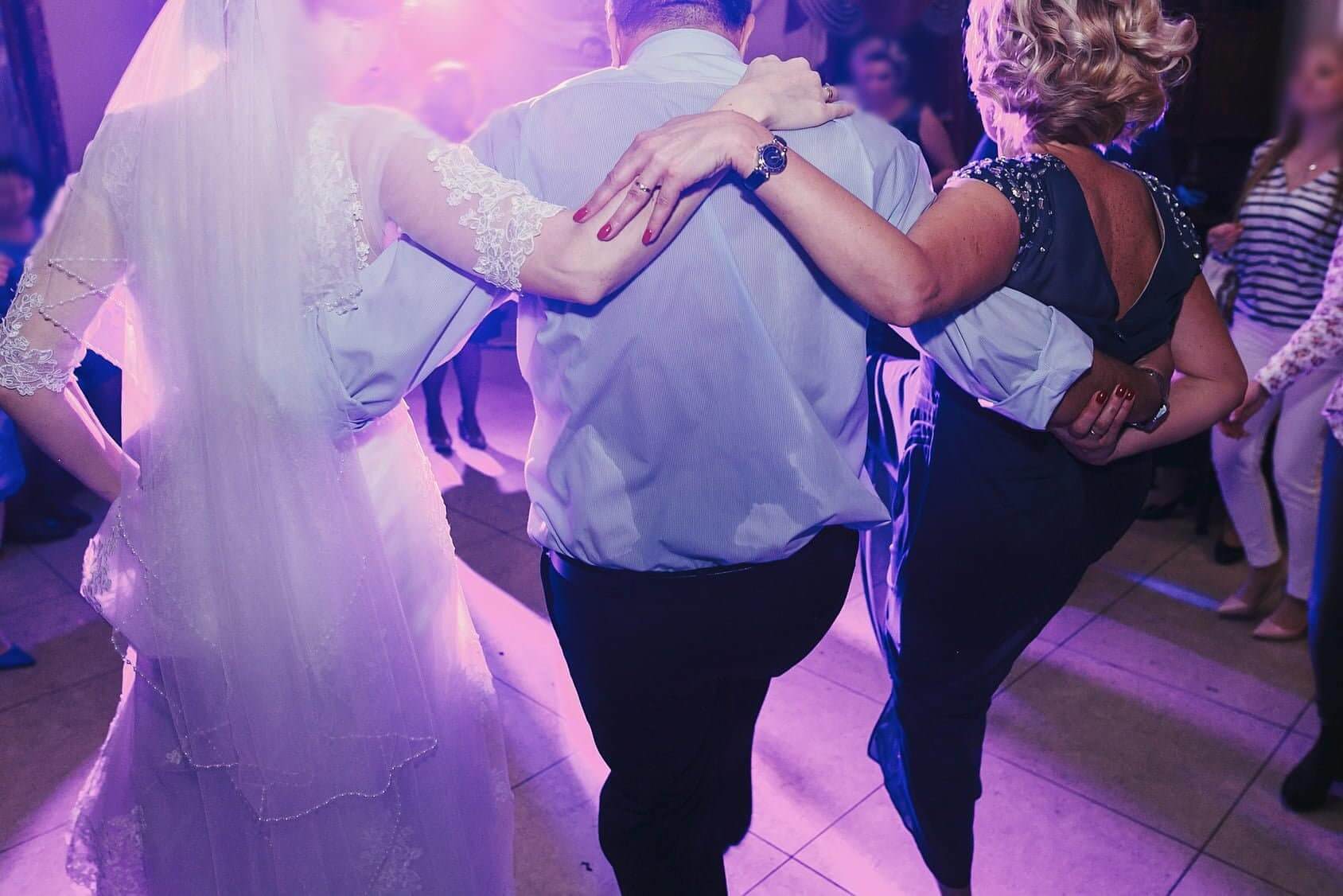 This is 2018, and if this dance is out-of-style and unappealing to the crowd, it is the chicken dance. Everyone has to flap their arms like wings and go round in circles and make the cuckoo sound. You may hop on one leg or two in the name of doing a chicken dance. This dance sailed in the 1950s, as that was the era of such dance, and there was only a handful of creativity back then.

But now, songs and dance are more modern, and wedding-appropriate are in trend. We will not forget the fact that it, for truth, has no connection to a wedding. Not even through the lyrics. The chicken dance song deserves to rest in peace, or better still, grace the children’s playground. Never at a wedding dance floor. It stays on the banned list.

The ChaCha Slide by DJ Casper

This is a 2001 song by DJ Casper, which contains a lot of nonsense that may leave everyone with body aches. Once upon a time, it was the toast of every happy place. It graced dances, balls, clubs, and even weddings. But now, people know better.

We agree that the song needs to take a rest. Because if we take a closer look at the lyrics, we see a bland song. It lacks content and depth: no message at all, and all-flash. Weddings are happy places, but every song played should say something meaningful, even if it is only a line. Bend your back, raise your hands, stamp on your feet, and it goes on. It has no business at a wedding. This song should stay at the club for happy hours.

The Macarena by Los Del Rio

This is a Spanish / English song released in 1993 with a beautiful intro beat, we must say. People dance with ignorance to this song until they listen to the lyrics. It generally talks about a girl named Macarena, whose boyfriend named Vitorino enlisted in the army. When he left to sign up, Macarena began sleeping with his two friends. Unapologetically, she says there was nothing she could do because they were handsome.

This song encourages promiscuity, unfaithfulness, and a negative type of wildness. Regardless of how danceable this song may be, there are lots of people it will mortify. Conservative and traditional guests will feel very uncomfortable listening to this. Kids should not listen to such. Even you, as a new couple, cannot start your married life endorsing promiscuity. This song has no business at a wedding. Banned list for life!

Going by the title of this song, one would be at a loss for words as to what the song is all about. One would feel the lyrics talk about love, fairy tales, and happily ever after. But like the rest of you all, we were downcast, not flat-out, though. This 2007 song is not even a wedding song because the lyrics do not blend with weddings. The song is a mere happy song that gets everyone to dance, shake off the sorrow and be merry because it is a good day. This is the reason we are not quite disappointed with the song. Do we get to be happy in the end, no?

Like we mentioned earlier, every wedding song must have a relative message. This song does not, and we guess that’s why it made its way to the top 10 banned wedding songs list. 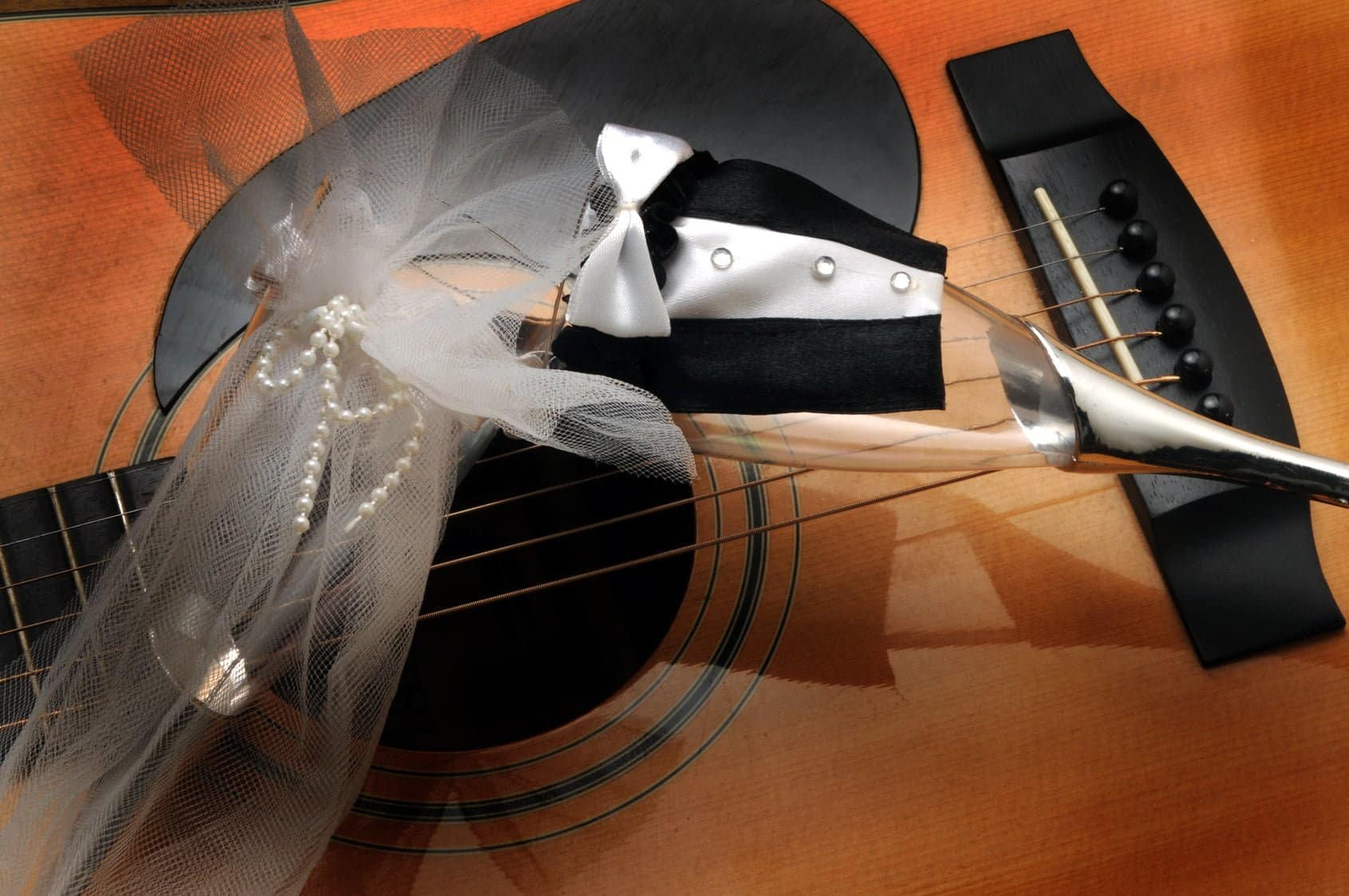 YMCA by The Village People

This is an oldie, all the way from 1978 and makes it to the top 10 most banned wedding songs list. We think Macarena should be number one on this list, with YMCA following right behind it. YMCA has this upbeat rhythm, but beneath all that, it is quite a sad song. This song keeps talking of a man who should dust himself up, go down to YMCA Street or city and get some good time. Hang out with the boys and do all the fun things.

We will remind ourselves that we are at a wedding, with a couple who are fresh on the “happily ever after a journey.” No one needs to dust up and go anywhere to have some fun. We wonder how it ever got a spot at weddings in the first place. The song is so depressing.

Ok! We think Electric Boogie topples YMCA on the charts. This should sit in comfort at number two. We do not like this song. This song has nothing going for it in any way. This is one song that will make old aunty Jane cringe. It should also never play within an earshot of children. This song objectifies women with dirty lyrics like the girl pumping like magic. She is moving like electric, she having the booty, and now you can hold it or something like that.

Thinking of a couple dancing to this leaves us with a nasty feeling. We are sure you do not want such a song of low morals to play at your wedding. Who selects such songs for weddings, by the way?

This song and any song that even comes close is not a wedding playlist material. Keep off!

This song is one to listen to if you want to take a break from adulthood and laugh a little. Yes, a little break from adulthood and responsibility because you are about to embarrass yourself with this one. You put your right foot in, left foot in, right hip in, left hip in, and even your whole body in. No kidding! This song will turn your wedding into a laughing stock or have every sensible person walking back to their seats one after the other.

We think this song will be most useful as a motivational song in exercise videos. It involves stretching our whole appendages and body very well, after all. This song can also be a great nursery rhyme to get kids to be active. Nothing much to say about this song, but it is a wedding, no, no! 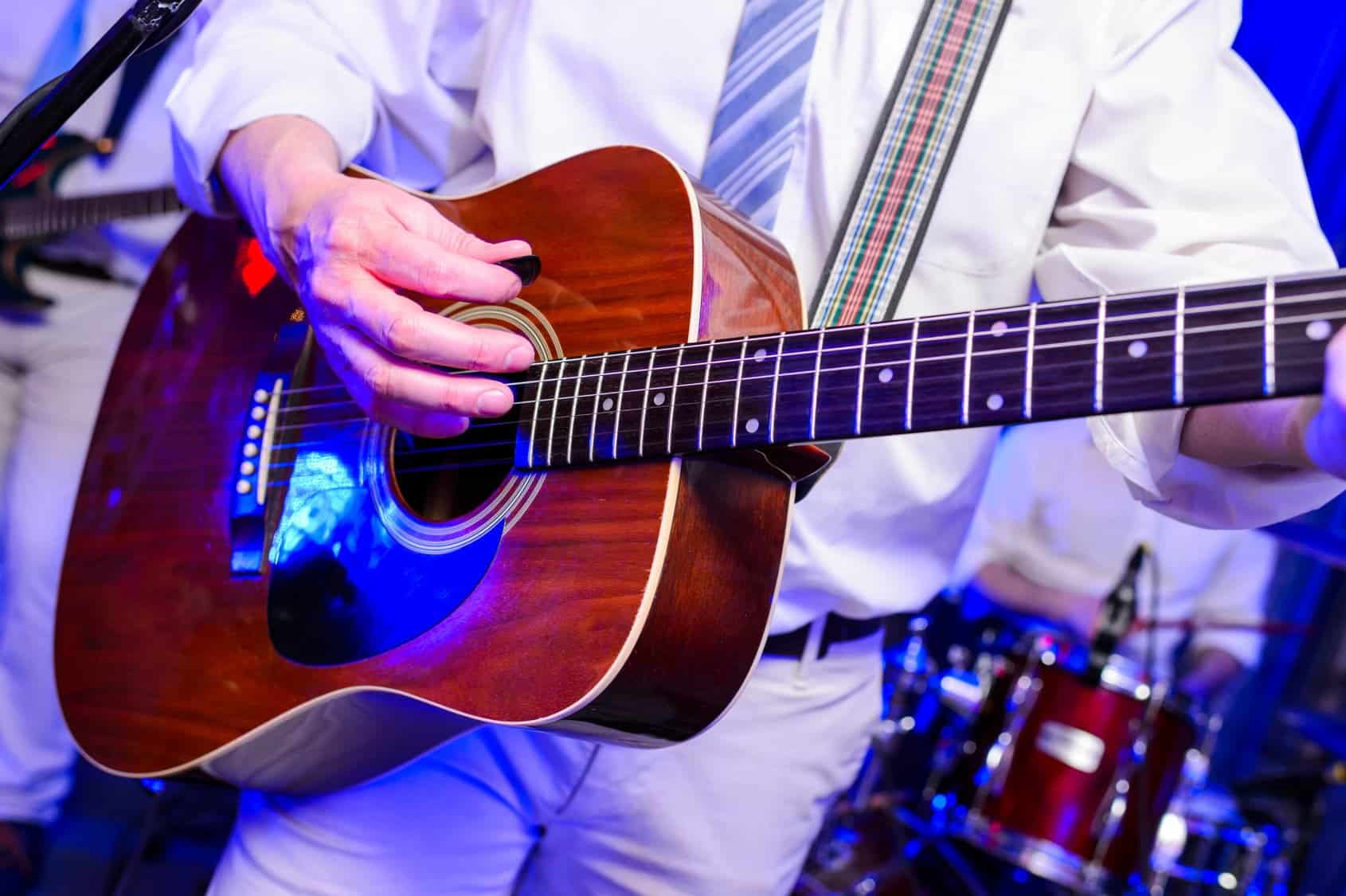 Or how would you feel about lyrics like “shaking boobies like congress and tools in his pants” coming up at your wedding? What is the name of banned songs is? We hope this song never makes it out of the banned list. It’s a disaster.

This is one of the recent wedding songs which made the banned list. While compiling this list, it’s the only song we feel bad about, to be honest. This song made it to the do not playlist wedding songs is one mystery we cannot solve right now. The song is great. “Happy” is exciting and comes with some subtle adrenaline. It is perfect for every happy gathering.

It is to some extent new, as its release date is 2013, so why? This leaves us asking questions like, “has its lifespan stretched? Are the lines overplayed? Is the song tired? Does it not appeal to the crowd anymore? Or perhaps, it made a list because it’s a mere happy song? Whatever it is, we hope it gets off the list soon. It’s one of the most fun wedding songs we ever danced to.

Released in 1959, this is a very tired song. Running on almost six decades, this song won every prestigious award of its time that there was. It is a wedding favorite, and why not? This song is a song of victory. It talks about love, its tenacity, strength, and consistency. It talks about loving a lady right from childhood till they grew. He almost lost her, but by a stroke of luck, she did not leave. Now he has his woman, and he feels like shouting for joy and throwing his legs in the air.

We think that is a great love story right there, but this song has served and paid its dues. Moreover, such may not be the circumstance of every couple and not wanted at weddings. We hope this song comes out of retirement sometime.

These songs listed are the top ten most banned wedding songs right now. But to be honest, it is your wedding after all. You own the day, so please, go for whatever makes you happy! If any of your best songs fall into the do not playlist wedding songs, go ahead and play them at your wedding. Popular opinions are not always correct opinions, so tune out the voice of opinions and go ahead to enjoy your day to the fullest- with your best songs!

Is there Aluminum in Your Deodorant?

Giving Your Kids Their Own Space

Use a Los Angeles Magician to Keep Your Guests Fully Entertained