Similarities and Differences between Java and C++

Both Java and C++ are major high-level programming languages that have been used greatly since their creation. Object-oriented programming is possible with both of these languages, meaning that the fundamentals of both are similar. However, there are obvious differences between them. Before looking at the structural differences between Java and C++, one must first understand that both languages were developed to satisfy different issues. I suggest reading the IT career roadmap article for those who wish to learn more about coding and technology career.

C++ was a direct successor to C, a programming language that did not encourage object-oriented programming. Thus, C++ was developed as a language that could easily be used for object-oriented programs. Essentially, C++ was an extension of C as it could do everything that C could do, but new features were added to make life easier for the programmer. Thus, we can conclude that while both C and C++ are high-level programming languages, C++ probably is just a bit “higher.” The major reason why C++ was created was to increase efficiency from C and to create advanced software while allowing programmers to have quite a bit of flexibility regarding how they wanted certain elements of their software to be programmed. 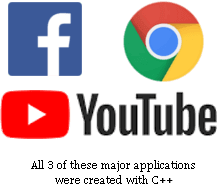 While C++ was directly derived from C and was primarily created for implementation within the software, Java’s beginnings were actually quite different. Java was built entirely from scratch, even though C influenced its syntax quite a bit. It was initially built to work with interactive TVs; however, that idea fell through. So instead, Java became popular because it promoted something called “write once, run anywhere.” Essentially, a program could be written in Java and then could be used on any system that supported Java. Unlike other languages at the time, there was no need to recompile the code initially written. This works because Java runs through a virtual machine, which is basically a virtual operating system. Java uses its own virtual machine, so the local OS does not actually run and compile it.

One of the largest differences between C++ and Java is converting the source code written by the programmer into machine language that a computer can actually interpret. In Java, code is compiled into bytecode, which is basically a code that the Java Virtual Machine (JVM) can understand and then convert into machine language. Then, when the Java program is actually running, it invokes the just-in-time (JIT) compiler, which converts the bytecode into machine language. Compiling in C++ is actually a bit more complicated, and it is not done through a virtual machine. Instead, it is completed through the local OS. There are four steps in the compilation process: preprocessing, compiling, assembling, and linking.

Preprocessing deals with specific lines of code that must be run before the actual C++ program is run. Thus, preprocessing is completed first. The compiling stage converts the source code into an assembly language‒a low-level language that is much more basic than the source code‒and creates a new file on the computer. The assembler then converts the assembly language into object code, which can change based on the programmer’s platform to compile their code. This is why the JVM for Java is so revolutionary because it is the same no matter what computer it is run on. The object code generated by a C++ compiler varies based on the computer used. After the object code is successfully produced, a linker is used to “link” the object code just generated to any libraries that were called within the C++ code. Finally, an executable file is prepared for the computer actually to run.

In the end, Java and C++ may seem very similar to an outsider or even to a programmer. While the syntax is slightly different, the two languages can be used to do similar tasks. Both are good for creating software, and they both can be used for object-oriented programming. While the inner workings for C++ and Java are quite different, and each has unique features, like C++’s inclusion of a “goto” statement, there are not many major differences.

So, you may be wondering what language you should use if they are both similar. Well, as of writing this, C++ is the heavily favored language as it is still currently being used for many current applications, like Facebook. Whereas the only real reason Java is not obsolete is due to its use in Android applications. Not only that, but C++ typically runs quicker and has a more predictable runtime. But, possibly the largest reason why C++ may be better to learn than Java is that darn “goto” statement that I mentioned earlier. That statement is surprisingly handy, and I swear that I wish they would implement something similar to it every time I am programming in Java. It is worth noting that the best way to learn a coding language is via projects and practice. For instance, DC Web Makers Company only offers project-based training where students learn concepts through real-world projects.

Learning C, C++, and Java are highly recommended for those who wish to pursue a software engineering career. Also, JavaScript used by a website designer and mobile App developers is completely different from Java. There are lots of resources for learning C++ or Java professionally. For instance, Coding Bootcamps institute offers many basic to advance programming classes focused on adults’ hands-on projects. In contrast, High School Technology Services offers similar classes for teenagers.